Buddhism as an alternative clearing path 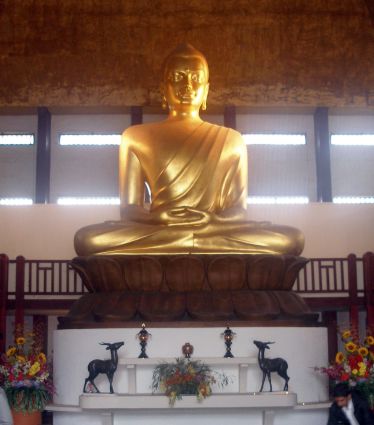 I discovered the concept and practice of clearing in Scientology.

But I had so many disagreements that I had to leave, and I was looking for a way to continue clearing outside of the church.

Eventually I discovered that Buddhism is a workable clearing path.

Buddhism includes teachings and techniques that allow reaching the purposes above.
That has been demonstrated by 2500 years of success stories

I have been using Buddhist techniques since about 5 years and I noticed the following improvements:


The workability of Buddhist techniques has also been demonstrated by several recent developments:

Both Buddhism and Scientology consider that our sufferings in this lifetime come from our actions in past lives (karma).  But they differ in the techniques that are used to free the individual from this burden.

The goal of man

According to Scientology, compassion is a low toned emotion, and the Church of Scientology tends to have contempt for people who have "low conditions" and to not help them.

According to the Dalai Lama, compassion is with love at the top of the Buddhist scale of emotions, and that is impossible to improve on the spiritual level without having love and compassion for others.

That is one of the main changes when switching from Scientology to Buddhism: the emphasis on love and compassion.

Both Buddhism and Scientology consider ethics as an important part of the way out. But Buddhism puts more emphasis on things such as right speech or right thoughts.

Scientology is using ethics to control and enslave its members, when in Buddhism ethics is a tool of personal improvement.

Scientology is exploring the past, looking for past incidents and considerations in order to erase them, when Buddhism is fully present time oriented. That is not necessary to have a good memory to practice Buddhist techniques.

Solo and not solo

Buddhist techniques are practiced in solo, when Scientology processing has to be applied by a trained auditor.

That is possible to use Buddhist techniques in any place and time, when Scientology processing has to be delivered in precise places and times. With Buddhism one is less enslaved by space and time.
Scientology depends also on the use of a technical device: the e-meter, when Buddhism does not depend on physical devices, so that it is possible to use Buddhist techniques in the desert or at the moment of our death.

Scientology is expensive, when Buddhism is free.

Looking at my experiences in Scientology, I found that most of the changes were only pretense, delusion. There were some improvements, but the quality of my life did not improve very much, I did not solve the main issues that led me to follow the Scientology bridge.

The  Buddhist path already changed my way of life and boosted my tone level to a great extent.

I don’t want to invalidate the Scientology bridge on the technical level, as some people are happy with it. However in my opinion it should be made affordable and free from the enslavement practiced by the Church of Scientology.

But I want to let it known that for people who cannot walk along the bridge of Scientology, Buddhism might be a workable alternative clearing path.

Posted by Curiosus at 9:43 AM No comments:

I have been a Scientologist for about 15 years. When I began having doubts about the church in the late nineties, I looked at its statistics in order to evaluate its condition. That is not easy as the statistics are not in the public domain.

But that is possible to count the attestations of upper levels published in the Source and Freewinds magazines. In my opinion, the OT6, OT7 and OT8 levels are the main product of the church, thus the statistics about these levels are a good indicator of the condition of the church.

The condition for the last 10 years is Emergency.
As that is a persistent condition, the condition is eventually Danger.

There were no OT7 attestations from 1997 to 2000. That is a consequence of the Golden Age of Tech. People who were on the level had to restart from the beginning by doing the Solo Nots certainty course.

Many an OT7 had to do this level twice, so the number of individual OT7 is less than 3625.

If scientologists were aware of these figures, they would know that something has to be radically changed in the church.

Posted by Curiosus at 3:04 AM No comments: